Nepalese children feed pigeons in Durbar Square in Kathmandu on January 9, 2014. Home to the palaces of Malla and Shah kings who ruled over the city, Durbar Square is listed as a UNESCO world heritage site. AFP PHOTO/Prakash MATHEMA
AFP
2/10 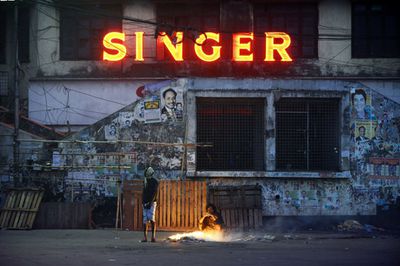 Bangladeshi men stand near a fire on the streets of downtown Dhaka during a cold winter morning on January 4, 2014. About a third of Dhaka's 15 million residents live in poverty. AFP PHOTO/Roberto SCHMIDT
AFP
3/10 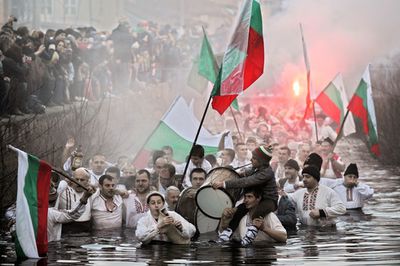 Men perform a traditional dance in the icy winter waters of the Tundzha river in the town of Kalofer as part of the Epiphany Day celebrations on January 6, 2014. As a tradition, an Eastern Orthodox priest throws a cross in the river and it is believed that the one who retreives it will be healthy trough the year as well as all those who dance in the icy waters. AFP PHOTO / NIKOLAY DOYCHINOV
AFP
4/10 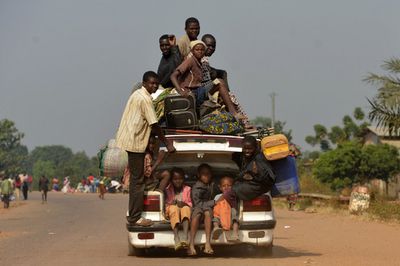 A car full with people and their belongings in the PK 9 district flee from Bangui on January 5, 2014. A hand grenade attack on a Bangui market Sunday left four people injured, including two women and a Burundian soldier from MISCA, the African force deployed in the Central African Republic. AFP PHOTO/MIGUEL MEDINA
AFP
5/10 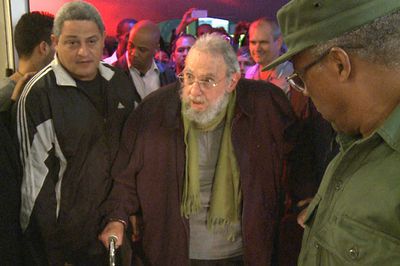 Still grab from a video taken on January 8, 2014 of former Cuban president Fidel Castro attending the inauguration of the nonprofit cultural centre �Kcho Romerillo, Laboratory for Art� in Havana. Cuban leader Fidel Castro has appeared in public for the first time in nine months, attending an art gallery opening near his home, the local press reported Thursday. The Cuban leader, who relinquished the presidency to his brother Raul in 2006 due to illness, last appeared in public in April when he opened a Havana school. AFP PHOTO / STR
AFP
6/10 Supporters of British comedy group Monty Python perform their skills during the International Silly Walk Day on January 7, 2013 in Brno, Czech Republic. More than 100 fans in costumes presented the Silly Walk, based on a sketch from the Monty Python troupe. AFP PHOTO / RADEK MICA
AFP
7/10 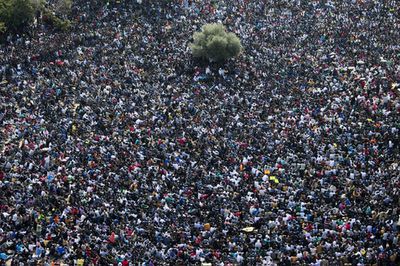 Thousands of African asylum seekers who entered Israel illegally via Egypt stage a protest in Tel Aviv on January 5, 2014 slamming the Jewish state's long-term detention of illegal immigrants. The demonstrators denounced the refusal of the authorities to grant them refugee status, as well as holding several hundred in detention centres. AFP PHOTO / JACK GUEZ
AFP
8/10

A woman (R) confronts Turkish riot policemen as they spray tear gas on demonstrators trying to march on January 9, 2014, in Istanbul, to the French consulate demanding justice for three female Kurdish rebels killed a year ago in Paris. Between 500 to 600 Kurdish protesters had gathered in front of Istanbul's Galatasaray High School, shouting "We want justice" for the three victims. As the protesters marched towards the French consulate, they were met with tear gas and plastic bullets fired by security forces seeking to disperse the crowd. AFP PHOTO / OZAN KOSE
AFP
9/10 Barefoot devotees clamber over one another to touch the Black Nazarene (C) during the ebony-hued wooden statue's slow procession from Manila's main park to a historic church in Manila on January 9, 2014. Millions of barefoot devotees packed the streets of the Philippine capital Manila on January 9 for one of the world's biggest Catholic parades, honouring a statue of Jesus Christ they believe has miraculous powers. AFP PHOTO / Jay DIRECTO
AFP
10/10

Syrians walk along a severely damaged road in the northeastern city of Deir Ezzor on January 4, 2014. Syrian rebels have united to kill and capture dozens of jihadists in a new "revolution" against an Al-Qaeda affiliate they accuse of worse abuses than the hated President Bashar al-Assad, activists said. AFP PHOTO / AHMAD ABOUD
AFP