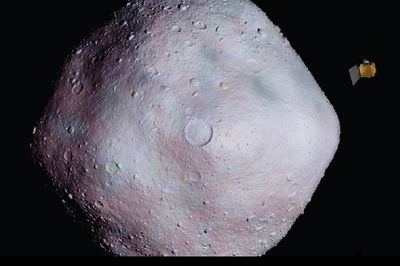 This NASA artist's concept shows the OSIRIS-REx spacecraft near asteroid 1999 RQ36 obtained on February 15, 2013. Every year, sensors designed to detect nuclear explosions see harmless bursts in Earth�s upper atmosphere from the breakup of an asteroid a few yards across. Tiny asteroids are much more numerous than big ones, so destructive hits to Earth are very rare. However, because of their potential for devastation, NASA's Near-Earth Object (NEO) observations program supports surveys which are undertaking sustained searches to find the largest objects and predict their impact threat to Earth. According to NASA's NEO program, there are more than 1,300 "Potentially Hazardous Asteroids" (PHAs) � objects at least 150 yards (about 140 meters) across with a very small chance of impacting us someday because their orbital paths take them close to Earth's orbit. =RESTRICTED TO EDITORIAL USE - MANDATORY CREDIT " AFP PHOTO /NASA Goddard Space Flight Center /" - NO MARKETING NO ADVERTISING CAMPAIGNS - DISTRIBUTED AS A SERVICE TO CLIENTS =
AFP
2/6 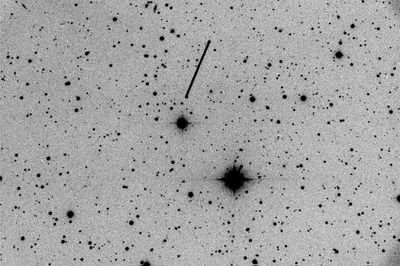 This image released by the European Space Agency and courtesy of Dave Herald, was acquired by amateur astronomer Dave Herald, Murrumbateman, Australia, earlier on April 15, 2013. It shows the approximately 50 m-diameter object about seven hours before closest approach. Asteroid 2012 DA14 is predicted to make closest approach to Earth at 20:27 CET on 15 February 2013. It will not impact Earth, however it will pass within about 28 000 km. �This is well inside the geostationary ring, where many communication satellites are located,� says Detlef Koschny, Head of NEO activities at ESA's Space Situational Awareness programme office.�There is no danger to these satellites, however, as the asteroid will come �from below� and not intersect the geostationary belt.�While tiny against the vastness of our Solar System, it should be visible in Europe to anyone with a good pair of binoculars and an idea of where to look. RESTRICTED TO EDITORIAL USE - MANDATORY CREDIT "AFP PHOTO / ESA - DAVE HERALD" - NO MARKETING NO ADVERTISING CAMPAIGNS - DISTRIBUTED AS A SERVICE TO CLIENTS -
AFP
3/6 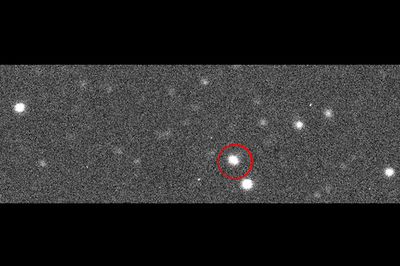 This image courtesy of NASA obtained February 15, 2013 shows an image depicting asteroid 2012 DA14 as it was seen on February 14, 2013, at a distance of 465,000 miles (748,000 kilometers). The image from an animation was created by astronomers at the Remanzacco Observatory in Italy using observations obtained remotely from the Faulkes Telescope South in Siding Springs, Australia. The images were taken with Faulkes Telescope South in Siding Springs, Australia, operated by Las Cumbres Observatory Global Telescope Network by E.Gomez. The animation was made by Remanzacco Observatory, Australia. The asteroid is the large bright spot moving near the middle of the field of view. The other dots are stars in the background. = RESTRICTED TO EDITORIAL USE - MANDATORY CREDIT " AFP PHOTO / NASA/LCOGT/E. Gomez/Faulkes South/Remanzacco Observatory/" - NO MARKETING NO ADVERTISING CAMPAIGNS - DISTRIBUTED AS A SERVICE TO CLIENTS =
AFP
4/6 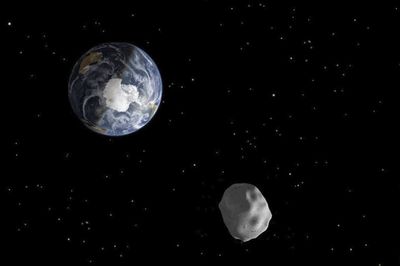 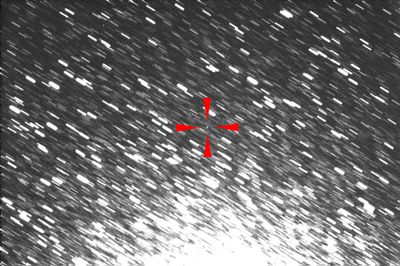 This NASA image obtained February 15, 2013 from D. Herald of Murrumbateman, Australia, shows the asteroid 2012 DA14 as a tiny speck in the center of the field of view. It was taken just past midnight on February 13, 2013 in Australia (the morning of February 12 in the US), as it headed towards its closest approach to Earth on February 15, 2013. The image is an overlay of 12 one-minute exposures. The asteroid is the small dot at the center, indicated by the red arrows. The white streaks are images of stars, trailed because the telescope was tracking the motion of the asteroid. At the time the image was taken, the asteroid was passing nearly in front of the globular cluster 47 Tucanae, located 17,000 light years away. The asteroid itself was only 770,000 miles (1.2 million kilometers) away, and closing in fast for its dramatic close approach on Feb. 15. At its closest, 2012 DA14 is expected to fly safely by the Earth at about 17,200 miles (27,700 kilometers) above the surface. = RESTRICTED TO EDITORIAL USE - MANDATORY CREDIT " AFP PHOTO / NASA- D. HERALD/" - NO MARKETING NO ADVERTISING CAMPAIGNS - DISTRIBUTED AS A SERVICE TO CLIENTS =
AFP
6/6 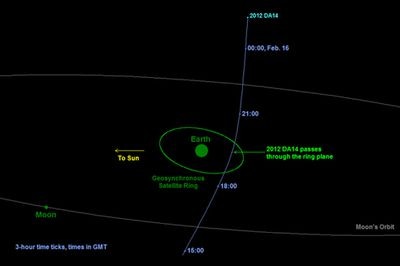